From here on out, my blog scope is going to be very limited, but I think I'll keep posting thoughts in here. Several months ago I completed an addition to the well known NES music creation program Famitracker.  This addition allows the development of plugins which can export your song to any format you can imagine. The feature has been released with an example exporter and an example sound driver that works with files that the exporter generates. Anyone is welcome to use the sound driver in their own games and improve it for their own use. If it is not enough for you you are also welcome to write your own plugin for your own sound engine.

As I write this, several improvements have recently been made to the plugin system and famitracker itself. I'll make another update when those things are released.

As for Nomolos, progress on the game is going well. The first boss has been completed, and several new background sets are in the works. I estimate it will be at least another year, perhaps two years before the game is complete. However, it should be pretty soon that I can demo the progress on the game to the larger NES development community. Here's a screen shot to tantalize you: 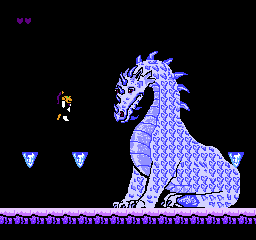