We've completed the final two levels of Nomolos, have graphics prepared for a 5th boss (not previously in the game outline), and are working on the graphics for the final boss. Soon I will begin coding the 5th boss. Progress is going very well and perhaps faster than at any previous stage of the project. Here's a screen shot from one of the final two levels: 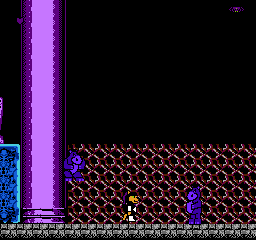 It shouldn't be more than a couple more months and the entire game, start to finish will be done except for a couple of cut scenes, the ending, and several months of thorough beta testing (which is going to start happening more concurrently once I've finished the last two bosses). Allowing for life to happen, I think a reasonable release date for this game will be somewhere in the middle of 2012, about 6 months before my original planned release date, January 2013.
Posted by Derek Andrews at 12:30 PM